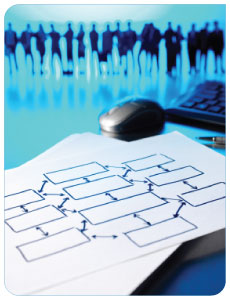 According to Nancy Pearson, Vice President of BPM, SOA and WebSphere Marketing at IBM, BPM (Business Process Management) exists in a sort of “parallel universe” to ACM (Advanced Case Management), which is a natural extension of the automated workflows produced by BPM suites. In an IBM newsletter article titled “Advanced case management and BPM: Better together,” Pearson points out that BPM, a technological approach to modeling, deploying, and refining business processes, is about increasing efficiency. She then goes on to explain that the need for ACM naturally emerges within the context of BPM workflows, which often lack the necessary business-logic complexity to deal with individual case issues. Put another way, sometimes a knowledge worker needs to step in to yield an effective case result. ACM is a technological approach to providing a case worker with all the facts, figures and analytic tools necessary to effectively shepherd cases to the best possible outcome.

The need for advanced document automation capability within document workflows is becoming ever more understood. BPM suites, which generally include tool sets for developing interactive forms, inevitably lack the sophistication to deal with the highly structured business logic of complex legal documentation and the corresponding data-gathering forms, which must mirror the complexity of the business logic built into the documents (see the HotDocs white paper: Building Interactive Forms in Document Workflows). Likewise, within some markets, most notably the legal services industry, where case management is a virtually ubiquitous technology, case management vendors inevitably include rudimentary tools for building basic, interactive forms and automating simple legal documents. Again, though, these sorts of document-assembly-light applications are simply inadequate to deal with the sophistication of legal instruments that inevitably emerge from legal case matters.

HotDocs, the global leader in document automation and document assembly, is an integrated stack of technologies that can not only automate virtually any set of legal documents and build correspondingly complex, powerful, interactive data-gathering forms, but can also provide platforms for deploying automated documents (commonly referred to as templates) in any environment, including the desktop, client/server (on premises), or the cloud. Furthermore, HotDocs includes a robust set of APIs that allow HotDocs templates to be consumed into virtually any workflow, case management system, or any other class of relevant business software.