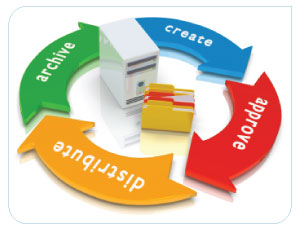 Since its birth in the early part of the century, BPM (Business Process Management) technology has become widely deployed and a key part of large-enterprise IT infrastructure. Traditional BPM deals specifically with predictable, structured processes with well defined steps that lead to understood conclusions. Advanced Document Generation (ADG) is a subset of business process management dealing specifically with the modeling of document generation processes.

Take, for example, a contract origination process, which could be triggered out of, for example, a CRM. A dataset stored in the CRM could be passed into the workflow for the purpose of generating a contract, along with collateral documentation, and then routed to various knowledge workers for approval, modification, or rejection. However, depending on the complexity of the documentation, most BPM suites simply lack the modeling capability to generate complex documents within the larger business process. That’s where ADG comes into service.

Advanced document generation takes a document-first approach, meaning that business rules are coded into the text of the document(s), accounting for all relevant permutations. Simple variables are inserted with point-specific formatting attributes added. Computed variables are also built and inserted at necessary merge points. Optional text blocks are defined with conditional logic, etc. Then, a sequence of interactive forms (an interview) is created to gather all the variable information necessary to generate the document(s).

In the contract origination process mentioned above, the CRM dataset could be passed directly into the document process interview and would appear in the context of the interview as “answered questions.” The interview would present all other questions necessary to complete the documentation set.

Enterprise-grade ADG systems are designed to handle any documentation set, no matter how large or complex. Such systems should have platforms for both on-premises and cloud-based deployment, and should have highly evolved APIs that will allow for integration into any automated process. Furthermore, an ADG system should work equally well in ad hoc and unstructured-process environments, such as those provided by today’s highly sophisticated adaptive case management systems.