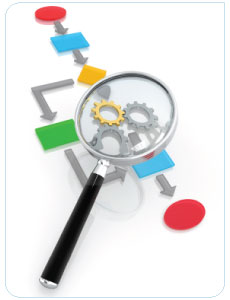 Document workflows are often designed and created for the routing, approval, and management of contracts within commercial enterprises. However, such a workflow may not be capable of actually generating the contract and collateral closing documents, a process which, in many cases, is complex and difficult, but would make the workflow significantly more effective. The fact is, while most BPM suites have some basic functionality for designing information-gathering forms (and maybe some limited ability to generate documents based on the gathered information), virtually none of them can deal with the types of document automation and assembly issues that arise with sophisticated contracts.

One way HotDocs dramatically improves document workflows is by allowing the routing and approval of datasets (a database record including a set of related data items), prior to the assembly of documents. In some use cases, when a business event triggers a document workflow, a partial dataset already exists, perhaps in a CRM. However, to generate a sophisticated contract and collateral documents, significantly more data may need to be gathered. In this scenario, the workflow could get the data payload from the CRM and then pre-populate a HotDocs interview with the partial dataset. The HotDocs interview could then be routed to whomever needed to provide the additional requisite data, including third parties-—for example, a borrower, guarantor, etc.

The completed HotDocs interview could then be routed, prior to assembling documents, to various parties for review and approval. Such an approach does not eliminate the need to route and approve the actual documents, but does improve the quality of documents. Furthermore, much of the additional data gathered by the HotDocs interview could be used for profiling the resulting documents directly into a document management system (DMS) or enterprise content management system (ECM). Likewise, the HotDocs-gathered data could be consumed by a contract lifecycle management system (CLM).

HotDocs includes both a client/server platform for enterprises that want to host it themselves or a cloud platform that allows virtually any workflow to consume HotDocs as a web service, an approach that dramatically reduces upfront spend. HotDocs Developer, the workhorse in the HotDocs technology stack for transforming word processing files and PDF forms into automated templates, is a desktop-based system that works seamlessly within MS Word or WordPerfect.