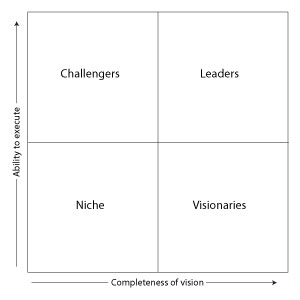 How BPM Vendors Can Move Up and to the Right: Improving Magic Quadrant Placement through Document Automation

The BPM (Business Process Management) market, otherwise known as workflow, is red hot, and consequently, virtually every major developer of business software, from Adobe to IBM and everyone in between, has an entrant in the market. Because there’s so much high-quality competition, getting a favorable placement in Gartner’s BPM Magic Quadrant (MQ) is difficult but also critical to overall success in the market. One way to achieve a better placement is by dramatically upgrading document automation capability.

Gartner’s Magic Quadrant is a two-dimensional graph based on the following criteria:
•Completeness of vision
•Ability to execute

The goal, of course, is to be both a visionary and a market leader. In other words, the higher up on the graph and the further to the right a BPM suite can land, the better it is likely to do in the market. Moving up on the graph—showing an elevated ability to execute—results from several factors, including management team, total revenue, channel partners, total number of employees, global installations, etc. Moving to the right results from demonstrating completeness of vision—proving thought leadership in the BPM space.

But one area in which virtually all of the major BPM suite vendors fall short is document automation, a complex sub-process in a high number of document workflows. BPM suite vendors generally provide some basic capability for building interactive data-gathering forms. Likewise, BPM suites may include some basic capability for merging simple data into text-based documents. However, none has the capability to fully automate complex legal documents or sets of documents, which could consist of dozens of pages of highly structured text (boilerplate, conditional, and repeating) containing hundreds of simple and complex variables. Likewise, BPM suites universally lack the ability to build sophisticated, interactive data-gathering sequences of forms that mirror the complexity and structure of the documents themselves– a critical aspect of enterprise-grade document automation.

One way BPM suite vendors could move to the right—that is, exhibit a more complete vision—is to dramatically enhance their ability to automate the generation of complex legal instruments within the context of document-centric workflows. Of course, building this level of functionality is easier said than done and would require significant investment in the development of a document-automation core competency, not to mention several hundred thousand lines of well formed code. A better option may be to license document automation technology from a market leader, such as HotDocs.

HotDocs is an integrated stack of technologies that enables the automation of even the most sophisticated documents and the creation of correspondingly powerful information-gathering sequences of forms. HotDocs can be deployed on the desktop, in the client/server environment, or as a hosted service via standard web services protocols (SOAP/REST), meaning HotDocs could be integrated into almost any workflow produced by virtually any BPM suite.