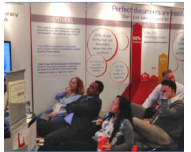 Having recently returned from LegalTech New York, three particular meetings that I was involved in stand out, primarily because they each validated a core supposition of the HotDocs cloud-based ecosystem: if we build it, they will come.

HotDocs–with it’s million+ users, 60% market share (ILTA 2013 Tech survey), best-of-breed badge from Gartner for ECM in 2013, a Gartner Cool Vendor distinction in 2014, and an A+ TechnoLawyer rating–has a diverse list of stakeholders in the business, including OEM partners, resellers, system integrators, publishers of every shape and size, and, as I already mentioned, lots of customers.

As a core business strategy going back a couple of years, we had docketed two new cloud technology initiatives, which, together, were to consolidate the disparate stakeholders of the HotDocs business into a cloud-based ecosystem: (1)HotDocs Cloud Services, a hosted document generation platform and (2)HotDocs Market, an iTunes-like repository that would expose the HotDocs user base to existing and new publishers. These publishers would range from international mega publishers, to bar associations, to specialty and regional publishers, to micropublishers—a new breed having highly specific skills and content, enabling them to penetrate jurisdictional markets with on-point, forms-based products in a way larger publishers have not and possibly can’t.

A key benefit of the ecosystem is that HotDocs customers will be able to access theseHotDocs Market-based products from within their own home-base applications, such as case and practice management systems, BPM workflows, custom, proprietary applications, etc.HotDocs Cloud Serviceswas released in Q3 of 2013, andHotDocs Marketis scheduled for release in the spring of 2015.

For those of you who haven’t experienced LegalTech, it’s a real circus and, for me, generally includes a number of scheduled meetings as well as dozens of ad hoc discussions. As I mentioned above, though, three such meetings really stand out, each with a different type of stakeholder and each because it validated key suppositions about our cloud business strategy.

HotDocs has long been a standard for publishers of all sizes and shapes that produce automated forms-based products. One large publisher is in the process now of converting existing desktop-based HotDocs forms libraries to cloud-ready libraries in preparation for the launch ofHotDocs Marketin the spring. I knew that going into the meeting, of course, so no surprise there.

The really interesting part, though, is a new type of business opportunity that resonated with this, and other large publishers we met with at LegalTech: an alignment of micro publishers (generally law practices who want to leverage their own HotDocs-based content by licensing it to other law practices) with established publishers. In other words, established publishers, such as the one we happened to be meeting with can partner with micropublishers and, in doing so, acquire jurisdictional HotDocs forms libraries, brand them, and load them ontoHotDocs Market, where they will be exposed to the ever growing HotDocs user base.

This approach, which is a variation of the latest trend in ecommerce (peer-to-peer marketing [P2P]), spawns business opportunities for a range of publishers and will result in a proliferation of new, on-point products for law firms of every size and in virtually every jurisdiction.

Shortly after the launch of HotDocs 1.0 (a couple decades back), we began hearing from practitioners who had automated their own forms and wanted to license them to other law practices, leveraging their HotDocs investment and creating an additional revenue driver. While this concept has always been inviting, given the limitations of desktop distribution, it was economically viable only for large jurisdictions and, in most instances, only for large, established publishers.

With the advent ofHotDocs Cloud Services, browser-based document generation became available to the masses. WhenHotDocs Market(the iTunes-like store) comes online, micro publishers (the practitioners mentioned above) can effectively do what they’ve wanted to do all along—publish their HotDocs content to their peers. In other words, in the cloud, HotDocs publishing into small jurisdictions is economically viable.

At LegalTech, I had a chance to sit down with a soon-to-be micropublisher, who has been developing a sophisticated library of court forms for an east coast jurisdiction. The library will be ready for theHotDocs Marketlaunch later this spring. I’ve been aware of this development project for some time, so in some ways, the meeting was just an update. What made it interesting, though, was that a representative of a state bar association was at the meeting, the key takeaway being that the bar has interest in publishing this developer’s forms library as a part of a larger offering designed especially to suit the needs of new lawyers entering the bar and needing help establishing a new legal practice.

These kinds of new business alliances and opportunities are what, we believed, would be the natural result of the ecosystem. As it nears completion, we’re already seeing its effects in action.

HotDocs has had long standing relationships with leading case management vendors in the legal market. With the advent ofHotDocs Cloud Services, case managers can now deliver HotDocs interviews within their own cloud offerings. But it’s the soon-to-be-releasedHotDocs Marketthat serves as the lynchpin of the HotDocs ecosystem, which, even in prerelease, is spawning new business opportunities. An example of this fact was evident in a meeting I had at LegalTech with a market leading, cloud-based case management vendor.

Given the state of legal services in North America (commoditization of legal services,the new normalof ATFs, fewer jobs for law school graduates, etc.) bar associations are being inundated with new members in need of services that will help them establish their own practices. Herein lays the growth area for case management vendors in their own highly competitive market: establishing relationships with new law practices before a competitor can.

This particular case management vendor is now feeling market pull in the form of bar associations that want to offer an integrated solution to new members that includes case management, document assembly, and pre-automated HotDocs libraries.

And that’s the ecosystem concept in action. The HotDocs cloud stack and business strategy spawns business opportunities for stakeholders, both old and new and will, in my opinion, disrupt not just existing publishing models, but, to some degree and in some areas, the legal services industry itself.