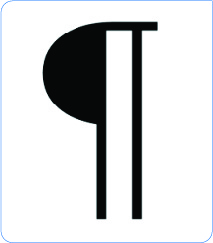 When developing templates in HotDocs and Microsoft Word, the pilcrow is incredibly important—arguably the most important character in any template. Oh, you don’t know what a pilcrow is? Don’t feel bad, you are not alone.

Some Word users are familiar with the pilcrow (that odd-looking, backwards-P shaped character that lounges nonchalantly amongst the Standard toolbar buttons); however, most people are not, for reasons that are both understandable and, quite frankly, baffling. It is understandable because Word makes these marks invisible by default, and most users don’t tinker (as I am compelled to do). However, I am baffled that someone at Microsoft thought this was a good idea. Clearly they thought that seeing these odd marks would confuse and alarm casual users, but the pilcrow is so important to how Word works that hiding them is a catastrophe waiting to happen (and doesn’t catastrophe sound like it should be a punctuation mark?).

Anyone who has used Word for more than five minutes has had the experience of working happily away when, for no apparent reason, the formatting goes… wrong. Numbering switches to bullets, indents appear from thin air, margins and spacing decide to throw off their oppressive shackles… you get the idea. And when this happens, it seems like whatever you do to try to fix the problem, just ends up making things worse.

Sound familiar? Then let me introduce you to my good friend, the pilcrow.

Pilcrow is its proper name, but Microsoft refers to it in all its documentation and menus as the “paragraph mark.” Given that I hate to type, and pilcrow has fewer letters, I’ll continue to refer to it by its proper name. Pilcrow was traditionally used by editors to indicate that the manuscript being edited needed to break here, thank you very much, and, when word processing came into being in the 1980s, many typographic and editorial elements like the pilcrow were grandfathered in.

The pilcrow in Word is specifically important because Word uses it as the keystone character that defines a “paragraph;” a specific object type in the Word object model that can have attributes applied to it. A paragraph’s pilcrow contains all its formatting information—things like the applied style, font face, font size, attributes like bold and italic, line spacing, even obscure typographical stuff like kerning. All of it stored within the pilcrow.

The easiest way to view your documents’ pilcrows (along with other useful things like tab characters and spaces) is to click on the Show All button in the main ribbon or toolbar (depending on your Word version). Older displays may have too low of a resolution and subsequently hide the Show All button in versions of Word that use toolbars rather than ribbons. If this is the case, you need to click the drop-down arrow located at the extreme right edge of the toolbar to see the hidden buttons, and, if the Show All button is on there, click it!

If you just opened Word and a blank document is showing, you will notice that it is no longer blank. There is a lone pilcrow sitting on the page. That is because no document can exist without at least one paragraph, even if that paragraph is empty. An important character indeed.

And the importance of the pilcrow magnifies when dealing with document automation. The concept of automating a document involves allowing the document to change based on new data provided by the user. HotDocs does this by wrapping text in the Word documents with instructions specifying the conditions under which the text should remain in the document—otherwise all those characters are deleted. All those characters… including any pilcrows.

Remember that episode of poltergeist formatting mentioned earlier? This is almost universally a combination of Word’s slightly odd formatting inheritance rules coupled with the hiding of the document’s pilcrows.

In other words when a pilcrow is deleted (manually or automatically), Word has specific (and sometimes non-intuitive) rules about how the resulting double-length paragraph will be formatted. If you are not used to these rules, and cannot see your pilcrows, it is often impossible not just to predict how the document will change but also to determine which pilcrow was deleted in the first place! And as soon as you introduce the concept of conditional text—sometimes it might be there, sometimes it might not—the problem magnifies tenfold.

By making formatting marks like the pilcrow visible, you can see what you are doing, while making structural changes to your HotDocs template—a bit like mapping the wiring in your house before you start drilling holes in the walls. I found that it took me about an hour to re-adjust my senses to simply ignore them while composing the main document, and for the ugly backwards-P to cease bothering me. And when I need to know about how my document is structured, the information is right there, plain as day.

Do yourself a favour and learn to love the pilcrow. And even if you don’t you can impress people with your weird knowledge of typesetting trivia.