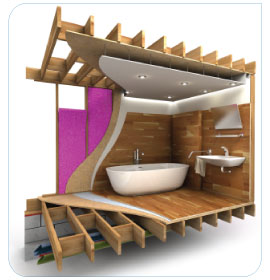 VBA and Macros and the Cost of Building a Bathroom

VBA (Visual Basic for Applications) is a powerful scripting language that can build serious functionality into MS Word Macros. Why then is VBA and Macros a poor choice for building document assembly templates in Word? Hard as it may be to imagine, the answer can best be understood by anyone who has ever added a new bathroom to a house.

What you have to do is add up all the costs—the lumber and pipes and fixtures, etc.—make sure you’ve got enough room on your credit card, head down to the local home center for your supplies, and then go to work. Depending on what you’re shooting for, it might run you as little as a few thousand dollars or as much as a few tens-of-thousands of dollars.

Now here’s a thought: Imagine what it would cost to build a bathroom if you had to manufacture your own tub, sink, faucets, light fixtures, etc. What would otherwise be a home improvement project for lots of do-it-yourselfers would become a multi-million-dollar manufacturing project—designers, engineers, artisans, factories, you name it—would all be necessary before you could take your first shower.

Now back to VBA and Macros. The fact is VBA simply doesn’t include large blocks of functionality that are necessary to do enterprise-grade document assembly. Scripting basics such as nested repeat loops, automatic and manual indexing, tri-state logic, built-in answer file storage and a long, long list of other absolute document assembly requirements would all have to be invented, that is, coded within VBA. We’re talking software engineers, a huge budget, and lots of time. Put another way, a document assembly project that could cost a few thousand dollars could, on the other hand,quite literally end up costing a few million.

Of course, there’s a much better way. HotDocs, the reigning heavy-weight among the document assembly RAD (Rapid Application Development) platforms is designed to let you transform even your most sophisticated documents and forms into interactive document assembly apps. And once you’ve built your apps with HotDocs, you can seamlessly deploy them on the desktop, on premesis, or in the cloud.

With HotDocs, you don’t have to invent and build any of the standard functionality that you’re absolutely going to want and need in your document assembly project.And the best part is, with HotDocs, you don’t need software engineers to do a job that should rightly be performed by actual content experts.