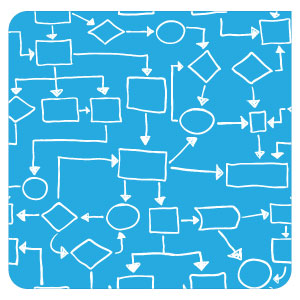 Adaptive Case Management (ACM) has evolved in response to the real need among enterprises to improve ad hoc and unstructured processes. ACM systems generally come complete with vertical industry templates (medical or accounting, for example), utilities for building complex rule bases for decision management, and, more often than not, functionality for modeling and deploying structured processes (workflows), which are often necessary for automating some parts of the case file.

Advanced Document Generation (ADG) is a subset of Business Process Management (BPM), specifically designed to handle the automated generation of complex legal documents. ADG models, which can, themselves, serve as standalone processes, are commonly deployed as a subset of a larger workflow. Take, for example, a loan origination workflow, which would require, in addition to the generation of a document set, the routing and approval of the loan.

The link between Advanced Document Generation (ADG) and Business Process Management (BPM) is well known and commonly used in many of the world’s largest organizations. In publishing giants, such as Thomson Reuters and LexisNexis; large banks, such as RBS; government agencies, such as the US DOJ or Caltrans; and countless other enterprises in virtually every industry imaginable, an ADG system (in these examples, the industry leading HotDocs) has been deeply embedded into virtually every relevant kind of structured process.

With adaptive case management systems, which are inherently document-centric to begin with, there’s a fairly straight line between ACMs and ADGs, at least in regard to structured processes defined within the context of a case file, especially those dealing with the generation of case-specific documents. However, enterprise-grade ADGs can also handle ad-hoc document-generation processes.

One way this ad-hoc approach to document generation can be achieved is through clause libraries. The clause library approach begins with standard document modeling techniques—merging simple variables in place of names, dates, etc. and providing point-specific formatting attributes for merged data, building computed variables and merging them into text at the appropriate points. However, the clause library approach involves dividing the text of a family of related documents into individual files, each containing a clause or paragraph. These clauses are then organized into lists that will be exposed to case workers during the document generation process, allowing the case worker to construct a document on the fly out of disparate parts.

Note that the clause library approach supplants the case worker’s judgment for scripted-in business logic that would allow the document generation model to determine which clause was inserted and where, depending on the facts of the case.